How do I get $KOIN back after joining the pool?

Burn Koin is a maximum yield pool, which means that it focuses on giving depositors the opportunity to earn as much reward as possible.

To achieve this, BurnKoin does two main things:

The trade off is that $KOIN liquidity is reduced in an effort to maximize $VHP levels and increase the chances of producing blocks.

Lets take a look at a a few examples on how a miner would manage their $KOIN and $VHP assuming that the network is operating at ideal conditions of 50% KOIN and 50% VHP. The network yield is 2% for no re-burning and 4% for re-burning to maintain VHP levels. For auto compounding, depending on how often you auto-compound, the yields are higher still.

EXAMPLE 3
Joe has 10,000 $KOIN and decides to join BurnKoin and deposits 9,000 $KOIN. BurnKoin automatically burns and converts it to 9000 $VHP. BurnKoin operates at maximum yield with automatic compounding and a 5% fee on profits (principal balance is never assessed any fees). Joe earns a yield of ~3.9% and at the end of the year, Joe has earned 351 $VHP. Since Joe never withdrew $KOIN, he has 1,000 $KOIN and 9,351 $VHP. Joe also has pVHP and can use that as collateral on DeFi opportunities, further increasing his total yield.

To get $KOIN, Joe withdraws 351 $KOIN from the BurnKoin $KOIN pool before the pool re-burns. Alternatively, Joe can also withdraw his $VHP at anytime and initiate a trade on KoinDX for VHP/KOIN. Joe will get more liquidity on KoinDX, but he’ll end up with trade fees and slippage.

To get a sense of how much you should expect to earn, I’ve provided two tables for you to use.

How to Read this table:

You can scale this table as well to determine how much daily $KOIN you should expect to earn as a solo miner. Simply take the amount in your wallet, divide it by 1,000 and multiply the result by the daily KOIN reward (solo mining).

By comparison, BurnKOIN will always be able to generate your equivalent daily reward since we’re holding your $VHP. Assuming not all burners will want to withdraw all at once, the BurnKOIN $KOIN pool to likely be greater than what you would get from solo mining. IN the next table below, we show how much $KOIN would theoretically be in the BurnKoin $KOIN pool on a daily basis with a few assumptions.

How to Read this Table

You can scale this table as well. Simply divide the total amount of VHP in BurnKoin’s wallet (found on Koinosblocks.com or on burnkoin.com) and multiply this by the daily KOIN reward for the correct global condition. Be aware that this assumes 100,000,000 virtual supply. You can scale this number down as well to match current conditions too. 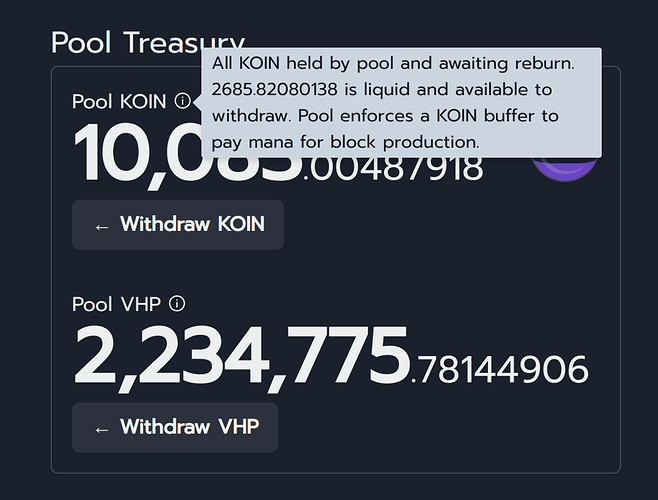 What is pVHP and how does it work? (example included)